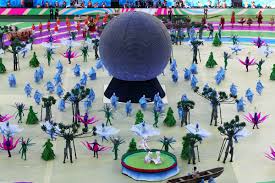 Just in case you thought you were watching the Chelsea Flower Show moments after someone slipped acid into the water coolers, the announcer explained. “They represent the vegetation of Brazil. It’s an allegory.” He stopped short of adding, “You idiots.”

It takes a special skill to spend months choreographing a show like this, and then make it appear as if everyone was told to forget what they had learnt, put on their craziest outfits, do a line of coke and go wild. Hell, get some of your mates to dress up as transvestite wraiths and carry you around in a canoe if that’s what turns you on.

If that had been my show, I would have thrown in a chorus line of coca plants and a herd of mules as a subtle way of thanking the world’s schnarf fiends for their part in boosting Brazil’s economy.

I was so looking forward to watching Bafana Bafana crash out in the first round but, as we all know, we failed to qualify. One of the consequences was that Gordon Igesund lost his job as coach. What kind of punishment is that? In some countries he would have had his legs chopped off.

Igesund. That’s Swedish, isn’t it? Hmm. The ANC has blamed a Swedish woman for inciting our mineworkers. We must impose sanctions against Sweden at once. No more of our fine box wine for them.

The Brazilian anthem sounded like thirty thousand men shouting at their wives. I started watching the opening game but after Brazil scored an own goal, it all become too much and I had to go and lie down.

A lot of people don’t understand soccer. By people, I mean women. At some point during the next 30 days, your husband, boyfriend, brother or father will insist that you watch at least one of the World Cup games.

“What do you mean ‘you don’t care who wins’?” they will shout. They will tell you that the last time Germany and England had a clash of this magnitude, three million people died.

Whatever you do, don’t shrug your shoulders and say, “It’s just a game.” Not unless you have the local paramedics on speed-dial.

Like everything else, the Greeks invented soccer. The Chinese, however, claim they came up with the idea. And the Egyptians say it was them. Today, you couldn’t put together a halfway decent team if you had to choose the best players from all three countries.

There are 32 nations competing in eight groups. If, at any stage, you’re confused about who is where, just google ‘group positions’. It won’t tell you much about the World Cup, but you’ll learn a bunch of stuff that will come in handy at your next ménage à treize.

You might think there should be only one law in soccer – no stabbing – and you would be right. Instead, there are at least 17. The men watching the game with you will insist there are many more laws than that. They will make them up as they go along.

Here is a truncated version of the basic ones you’ll need to know if you hope to stand a chance of following the game. First, make sure you are in control of the remote at all times.

Law 1. Soccer can be played on grass or artificial turf, but it must be green. This is nothing short of colourism. Five minutes into the game, go and stand in front of the TV with your arms folded. Demand to know why the pitch can’t be yellow or blue. Refuse to move until you get a satisfactory answer. Or you’re threatened with a gun.

Law 2. The ball must be spherical in shape and made of leather or another comparable medium. Its circumference must be in the range of 27 to 28 inches. Or, in African terms, the size of the average willy. I have seen children playing soccer with a ball made of plastic bags wadded together with an elastic band. They should be arrested and charged.

Law 3. Matches are played by two teams of 11 to a side. You may ask, why 11? Why not 13? Or 27? Turn the TV off and wait for an answer. It will be quick in coming. My advice is that you’re quick in going. Run away and hide the remote. Use it to bargain for your life.

Law 4. Players are required to wear a jersey, shorts, shin guards, socks and cleats. The socks must cover the shin guards entirely. Because there’s nothing more obscene than an exposed shin guard. It’s discriminatory, is what it is. Players should be allowed to express their individuality by wearing whatever they please. Insist that everyone in the room removes their clothes in protest. You will probably need to google ‘group positions’ at some point.

Law 5. The referee is the authority on the field, and his word is law. This is ridiculous, considering that so many of them shouldn’t be allowed onto a pitch without a guide dog on a leash.

Law 6. The assistant referees are primarily responsible for assisting … blah blah blah. They have no real power and are generally used for target practice by people in the cheap seats.

Law 7. A soccer match is comprised of two 45-minute halves. Another outrageous rule. They should keep playing until one side surrenders.

Law 8. Kick-off is determined by a coin toss. Boring, right? Why not toss a dwarf? Two sports in one. Better value for money means bigger crowds. I’m surprised Fifa hasn’t thought of it.

Law 9. Some drivel about the ball being in or out of play.

Law 10. A goal is scored when the entire ball has crossed the goal line. A silly rule. A goal should be deemed to be scored if the player runs around like a sheep dog, tears his shirt off and thrusts his hips at the crowd.

Law 11. The offside rule. The inability to understand this rule is not necessarily gender-specific, as a lot of men seem to think. I have on many occasions jumped up and put my boot through the telly after the ref blew his whistle for no reason other than to stop my team from scoring. The offside rule is more complicated than Fermat’s last theorem. Never ask anyone to explain it without first being sedated.

Law 12. Fouls and misconduct. There are more potential offences in soccer than there are on the books of the International Court of Justice. If players adhered to the letter of the law, the game would essentially be netball with feet and about as exciting as synchronised swimming. No pushing? No spitting? What is this – the Gautrain?

Law 13. Free Kick is broken into two categories, direct and indirect. There is no such thing as a free kick.

Law 14. The penalty kick. The referee uses this to punish goalkeepers to whom he has taken a personal dislike. When you see the goalie lose the match single-handedly, after previously stopping 374 shots, you will weep at the injustice of it all and almost immediately begin taking it out on your partner. Next to Law 11, Law 14 is the biggest cause of divorce among couples who watch soccer.

Law 15. The throw-in. I know. How can there be a law governing the picking up of a ball and throwing it back into the game? All you need is a pair of arms. And hands, obviously. The only reason you wouldn’t have hands is if you played for Saudi Arabia and got caught nicking an extra biscuit at halftime.

Law 17. The corner kick. Marginally more interesting than the goal kick because it puts the player in close proximity to a hostile, heavily armed mob.

One thought on “Jungle Fever at the World Cup”