With supermarkets busier than churches on a Sunday, the Church of England is marketing Jesus in the guise of a shopper to boost his appeal – Daily Mail

“Excuse me, sir,” said the security guard at the entrance to Pick n Pray. “You can’t come in here without shoes.” Jesus smiled and reached out to touch the guard on the head. Jesus was on the floor before you could say “Hail Mary”. Once the misunderstanding had been cleared up, the guard helped Jesus to his feet.

“Sorry about that. Thought you were going for my throat. Can’t be too careful these days. You’re still going to need shoes.”

Jesus walked over to a teenager in a wheelchair and spoke to him for a few minutes. After the kid had jumped around for a bit, babbling and weeping as the miraculously cured are inclined to do, he took off his sneakers and gave them to Jesus.

The security guard sensed something very meaningful had happened right in front of his eyes but he couldn’t work out what it was. Anyway, the important thing was that the freak in the dress was now wearing shoes.

Right away, Jesus was drawn to the fruit and veg section. He remembered his Father telling him stories about the Garden of Eden. It was just the way he always pictured it, only with a lot more people. And fewer serpents. Wandering about, stroking the broccoli and admiring the plums, he caught sight of a woman handing a man a bag of apples. Recalling the damage that a single apple was capable of causing, he lunged across the aisle and knocked the bag from the man’s hand.

“What the fuck?” shouted the shopper. Jesus kicked the apples away and made the sign of the cross without even knowing what it meant. “This is forbidden fruit from the Tree of Knowledge of Good and Evil! Thou shalt not eat of it!” Mothers gathered their terrified children and made for the relative safety of the dairy aisle.

“You’re talking kak,” said the woman. “They come from Ceres. Got ’em yesterday.”

“What is this Ceres of which you speak, harlot?” said Jesus.

“The Mount of Olives?”

“Nay my larney. Ceres just does fruit. Olives is mos a vegetable.”

Jesus gathered his robes and backed away. “You will be cursed with hard labour and pain in childbirth.”

The shop assistant pulled a face. “Asseblief. I work for Raymond Ackerman. Don’t talk to me about hard labour. And I got seven laaities. I feel no pain. I just sommer drop them right here between the pineapples and the paw-paws.” She threw her head back and laughed like the whore of Babylon.

Pale and shaken, Jesus followed the signs to the deli. The name reminded him of home. Deli. There was something Jewish about it.

Crossing the vast wilderness of dog pellets, he came upon mounds of slaughtered beasts and a terrible sadness rose up in him. “What tragedy has befallen this place? How am I to lie down with lambs when they have been rent asunder and covered in shrink-wrap?”

His eye fell upon a rack of pork ribs. With an anguished cry he lifted them high above his head. “Only the Devil has the power to turn women back into ribs!”

Just then the butcher came out from the back holding a bag of blood and gore. “Are you the dog bones?” he said. Jesus fell back. “I am the King of the Jews!” The butcher looked disappointed. “You’ll want the kosher section then. It’s over there. Just past the …”

But it was too late. Jesus was gone. Desperately searching for a way out, he found his path barred by what appeared to be a 937-year-old woman. She looked a little like Lot’s wife. Or a lot like Little’s wife. She pressed a fillet of hake into the Messiah’s trembling hands and said, “Forgot my bloody glasses. Can you tell me the price on that?” In an instant the floor was covered in fish. And not just hake, but the good stuff too. Patagonian toothfish and white musselcracker. Things turned nasty when a hammerhead shark materialised out of nowhere and thrashed its way down the toiletries aisle biting hollow-eyed housewives immobilised by Prozac.

Jesus ran like he hadn’t run since the Romans were after him. He sprinted through the bakery wreaking havoc as wholewheat loaves multiplied in his wake, then across the appliance section, along the household cleansers, down the tinned foods, through the pot plants – causing the hydrangeas to burst into flames – and, finally, out of the front door.

“Not so fast, buddy,” said the security guard. “Where’s your receipt for that?”

“What? What?” shouted Jesus, eyes rolling madly in his head.

“That crown of thorns. You didn’t have it when you came in. Come with me.” 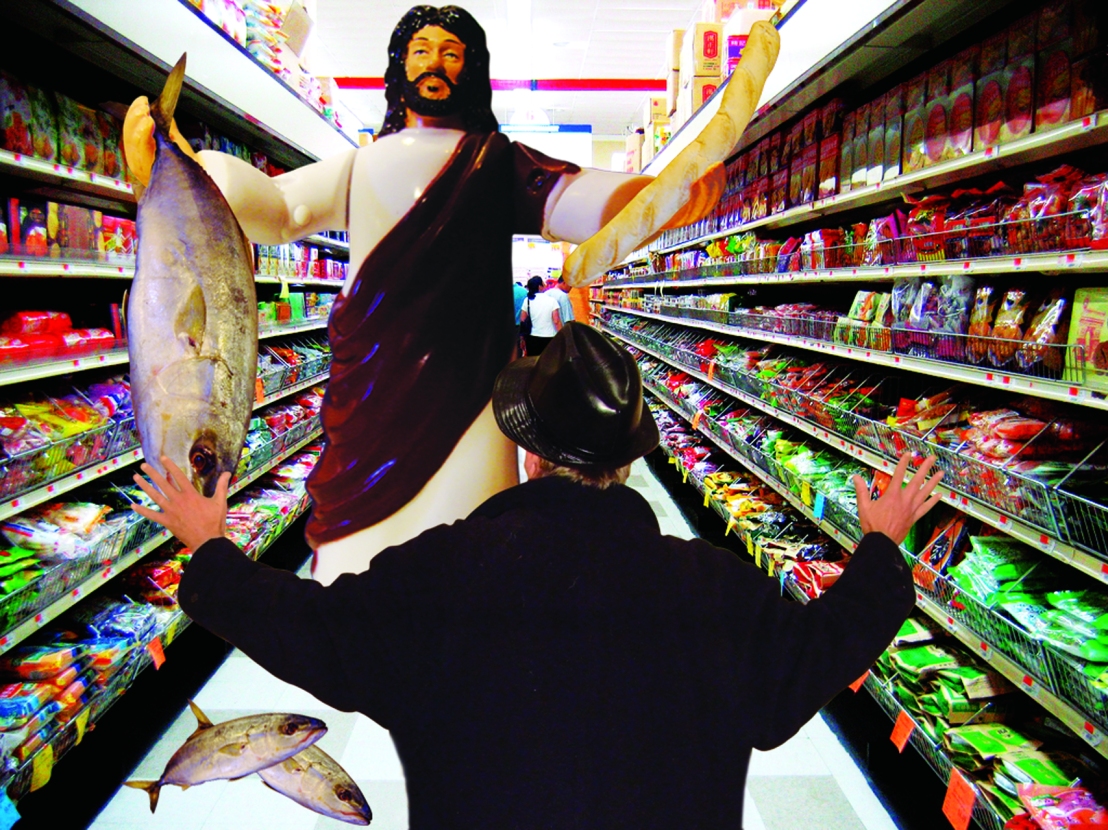