I was woken by church bells last Thursday morning. The sky was a brilliant shade of blue and the birds seemed happier than usual. I could hear the sound of children laughing. It felt as if I were living in a village in Palermo and the Godfather, a ruthless man disliked by all, had died during the night.

Post-celebratory hangover notwithstanding, waking up to a South Africa without Jacob Zuma was intoxicating. Then, later in the day when Cyril Ramapahosa was sworn in as president, the sense of a fresh beginning was overwhelming. It was like the birth of a new nation. I got a glimpse of how lapsed Christians must feel when they return to the fold after running out of money for drugs. We are born-again South Africans. Halleluja.

Even the Hawks have discovered, to their surprise, that they were capable of removing their blinders all along. Their wings have grown stiff over the years but it seems they still remember how to fly.

Zuma was pushed onto his sword, an unusual way for any president to leave office. Then again, he was hardly a conventional president. For a start he showed no obvious interest in politics, which is rare for a politician. We know what made the man happy. Sex, money and overseas travel. The same goes for all of us, I suppose, but we’re not in charge of running a country. Most of us couldn’t have done any worse than Zuma, quite frankly.

I believe him when he says he doesn’t know what he’s done wrong. The ANC won’t tell him and nor will they tell us. The ex-president’s pet poison dwarf, Jessie Duarte, told journalists during her post-resignation hagiographic eulogy that she wasn’t going to give reasons for his recall because the media is “not known for being sensitive” and for caring about the feelings of people and their families. I laughed so hard that beer spurted from my nose.

The fact that Zuma is genuinely puzzled about his recall was evident when he chose to go on live television and complain to an SABC reporter about his unfair treatment. He seriously believed that he could win support by whining to the nation. That’s us, by the way. The people who have wanted him gone for far longer than his own party has. He was appealing to the most hostile audience imaginable, which supports my theory that he honestly believes he is loved by everyone apart from a handful of dissidents led by Cyril Ramaphosa.

There has been so much lyin’ going on lately that at some point my attention turned to lions, who hardly ever lie. They pretend a fair bit, though. Nothing to see here, Miss Springbok. I’m not a lion, I’m a termite mound. Zuma, on the other hand, has been pretending to be a lion and it turns out that he was a termite mound all along. Full of venal, corrupt termites, some of which managed to gnaw their way into the cabinet. This is why it’s full of dead wood today.

We all know about termites like Bathabile Dlamini, Malusi Gigaba, Faith Muthambi, Lynne Brown, Mosebenzi Zwane, the list goes on, and it’s only right that the cabinet be fumigated to rid us of their insatiable ilk. But there are others who aren’t necessarily chewing their way through the fabric of our body politic. These ones are just as dangerous. They are, simply put, not very bright. I suspect this was part of Zuma’s strategy. Deploy the sluggish termites to slow bureaucracy down not so much that the economy grinds to a halt, but just enough to allow the industrious termites to latch on to the money streams and start the pilfering process.

To be honest, I don’t know if they work in concert. There are many perfect examples of the Dunning-Kruger Effect in almost every government department, but it could be that these deployees aren’t necessarily corrupt. They’re just morons. One of these happens to be our environmental affairs minister. Don’t feel bad if you don’t know her name. It’s only because she’s not overtly a part of the state capture brigade. She’s one of the other termites. Edna Molewa is there to think slowly, act slowly and take decisions based on how she’s feeling that day.

She’s keen on selling our rhino horn stockpile, has granted emissions compliance exemptions to dozens of companies, including Eskom, and, in her previous portfolio, blamed wet coal for the electricity blackouts which, as we now know, was caused by the Guptas. My fear is that in Cyril’s rush to get rid of the rapacious termites, he will overlook bumbling imbeciles like Edna.

In terms of importance, the government ranks environmental affairs down there with sport and recreation. Edna seems to think it’s lame to protect stuff like animals and the climate. Take lions, for instance. I’ve never met Edna but from what I have read it seems unlikely she’s a cat person.

Members of the Arizona-based Safari Club International and Dallas Safari Club are also not cat people. They are not even animal people, unless by animal people you mean people who pay money to murder animals just for the hell of it. And yet both organisations recently condemned the hunting of captive-bred lions, something they had no problem with for years. I don’t know why the sudden change of attitude. A lot of states are legalising weed these days. Maybe they were high.

The SCI banned the marketing of canned lion hunts through the organisation and notified its hunters and clients that trophies from captive-bred lion hunts would be ineligible for the club’s macabre Record Book which lists members who have killed the biggest/smallest/most species.

The equally bloodthirsty Dallas Safari Club said there was no evidence that captive-bred lion hunting contributed to the conservation of wild lions. So there it is. Even Donald Trump’s people think it’s wrong. Not our Edna, though.

“A barbaric and morally repugnant relic of colonialism that is out of step with 21st century forward thinking.” No, former Australian minister Greg Hunt wasn’t describing Helen Zille. He was talking about canned lion hunting.

Confronted with a global backlash against the practice of domesticating lions, then shooting them in the face when they come up to you for a cuddle, our Edna gave it some thought. Her mouth fell open and her eyes rolled into the back of her head. A passing tick bird landed on her nose and gave her teeth a quick clean. Her think over, she decided that all lions were fair game and it didn’t really matter that their bones were being sold to criminal networks in Asia.

“In light of the fact that South Africa has legislative protection in place for endangered and threatened species and subscribes to the principles of sustainable utilisation of natural resources, there is no reason to prohibit the breeding of lions in captivity for hunting purposes,” he said.

And while our caged lions might be safe from American hunters, there’s a whole new bunch of good old boys with big guns and tiny willies waiting in the wings. They’re going to be coming from Russia, China and Eastern Europe. At least the Americans were only doing it so they could hang a head on their wall. These guys are going to want to eat their kill. Wash it down with a Lion lager.

The Free State is a haven for the captive breeding of lions. Ace Magashule’s province. What a surprise. It was a vile province during apartheid and it’s not much better now. I think KwaZulu-Natal should invade and annex it without delay.

I also think the Professional Hunters’ Association of South Africa and the SA Predator Association should try to be less neanderthal about the issue. Be less blinded by greed and more open to conservation.

Now that we seem to have found our moral compass after nine lost years, perhaps President Ramaphosa could use it to help civil servants like Edna Molewa find their way out. 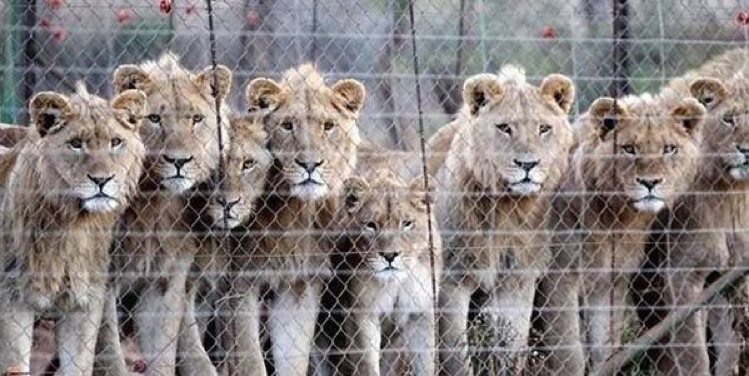