A study done last year by Bloomberg found South Africa to be the second most stressed country out of 74 surveyed. The title is currently held by Nigeria. Anyone who has driven through Lagos will understand why. It was damnably close though, with us missing the top spot by a mere point-one percent. Hopes are pinned on Jacob Zuma staying in power. This would almost certainly bump us into first place.

However, our chances of making it to world number one suffered a setback when our Teflon president said at his 75th birthday party that there was no Zulu word for stress. Stress, he said, was a white man’s disease.

“I do not have stress,” he said. You know who else doesn’t suffer from stress? Megalomaniacal sociopaths. Self-serving narcissists. Avaricious scofflaws who give fresh meaning to the Dunning-Kruger effect.

“In the Zulu nation‚ stress does not exist,” he said. “You can go to a traditional healer asking to be healed from stress‚ but they do not have muti for stress.” Zuma is probably right about this. Traditional healers might not be able to give you muti for stress, but they will give you muti to turn your unpleasant neighbour into a chicken. That will go a long way towards alleviating the stress you don’t have.

I’m not sure that Zuma is right when he calls stress a disease. It’s more of just an anxious gnawing feeling, which isn’t the same as, say, cancer or tuberculosis. Sure, stress can probably cause a disease, but you have to watch your terminology. Next thing, you’re saying a virus can’t cause a syndrome and before you know it you’re slumped over a counter telling the barman that you were the president once. Sure you were, sir. I think you’ve had enough.

People who have studied for seven years and know their way around a stethoscope tell me that stress can affect your mind and body. Oh, please. So can alcohol. It’s pretty much the only reason we drink the filth. But then we get drunk and it’s impregnations and proposals and off to the magistrate’s court and ten years later a man in a white coat gives us six months to live. That’s stress for you. It’s not the alcohol. It’s never the alcohol.

As someone who has studied medicine for a number of decades without ever having to write exams or pitch up on graduation day, I can confidently say that stress is not the killer it’s made out to be. The real killers are your boss, your bank manager and your spouse. The accessories are your children and sometimes your parents.

Stress can also be triggered by things other people might consider minor. Like getting to the bottle store an hour before it opens. Or realising that you’ve been contributing to the R550-million given to King Zwelithini and his loved ones over the last ten years while the Royal Household Trust apparently raise funds for the tribal monarchy down at the Suncoast Casino.

Conventionally, however, the top three causes of stress are the death of a loved one, a divorce and moving house. There’s no arguing with the first, but I’d say there are more stressful things in life than getting divorced and moving house. Driving, for starters. I’d rather live in a homeless shelter than do a morning and evening rush hour commute.

If you live in Cape Town, over your working life you’re looking at 800 days – nearly three years – of doing nothing but changing from first to second gear while listening to an idiot DJ and brimming with hatred for humanity. And there’s no point cursing the traffic. You are the traffic.

While a loved one’s death tops the list, death as a thing isn’t stressful at all. People we don’t know are dying all the time and we don’t get stressed about that. This is quite normal because we are, in essence, savages.

The positioning of divorce at number two on the list should be condemned and set aside. If death is qualified as stressful only if it happens to a loved one, then so too should divorce. Divorce is only stressful if you are crazy in love and the person formerly known as sweetheart isn’t. This situation usually presents itself in the space of one terrible evening.

It’s less stressful to allow your mutual hatred for one another to develop over a period of years so that by the time one of you suggests divorce, it’s a huge relief all round. Just say goodbye. Don’t get drunk and have a last pangalang. You don’t want any accidents that might entail you having to see each other, no matter how fleetingly, every second weekend and alternate school holidays for the next 18 years.

I am facing my second divorce and already I am girding my mental loins for a third marriage, which I fully expect to happen because there is little point in stopping once you’ve had two of anything. If you have ever tried two of something and never had a third, I’d like to know what it is.

Number three on the stress list is moving house. This is clearly not true. Unless you’re moving from uMhlanga to uMlazi or from Camps Bay to Pollsmoor Prison, there’s no reason to get upset. The most stressful thing about moving house is trying to stop the packing tape from sticking itself to the roll. Some people lose the packing tape altogether and end up stabbing themselves in the eye.

Then there’s something called the Holmes and Rahe Stress Scale and a more lucid definition: “Stress is a condition or feeling experienced when a person perceives that demands exceed the personal and social resources the individual is able to mobilise.” Or, in terms that you and I can understand, “This is fucked up and I’m running away.”

I don’t know who Holmes and Rahe are and nor do I care. They’re not politicians so there is no real reason for them to lie. That’s good enough for me. They surveyed more than 5 000 patients and asked them to say whether they had any experience of a series of 43 events in the previous two years.

Each event had a different weight for stress. The more events the patient added up, the higher the score. These events include things like jail time, sex difficulties, trouble with in-laws, trouble with the boss and minor violations of the law – in other words, stuff we all live with every single goddamn day.

Being a little drunk, I did the test and scored an impressive 393. I thought that was pretty damn good. Higher than I’ve ever got for anything. With that kind of mark you want to rush home and burst through the front door and shout, “Honey, I got almost 400 on the test!” But honey’s on the couch in front of the TV slack-jawed and drooling with 500mg of benzodiazepines ponying around the arterial racetrack. Anyway. The results of my score? “You have a high or very high risk of becoming ill in the near future.”

And that’s it. They don’t tell you that you need to chuck your job, get divorced or stop drinking vodka before 10am. They simply tell you that you’re going to get ill in the near future. Like next year? In the middle of the next sentence?

To be fair, they do suggest solutions. For instance, you can acquire “conflict resolution skills”. Here, this means acquiring an AK-47. It’s a traditional South African way of resolving conflict. 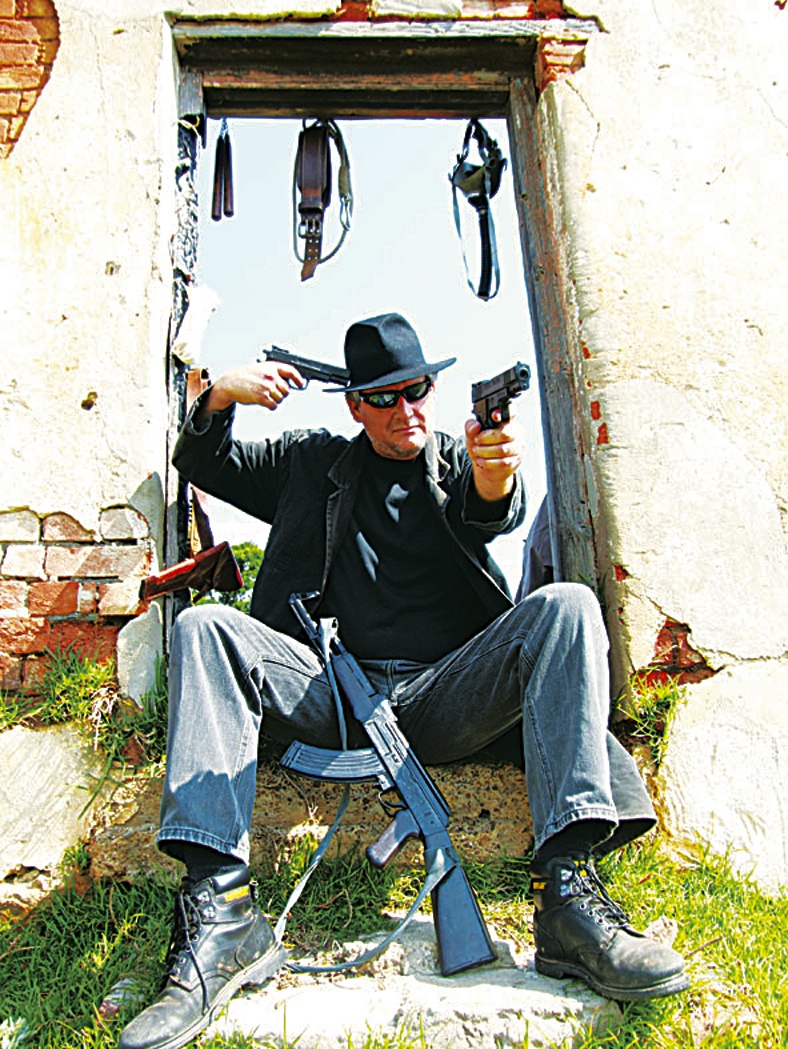 It is about time you advertised for someone to come up with a plan for Table Mountain National Park. The place is going to seed. It is covered from head to toe in unsightly fynbos. Deadly snakes and unattractive animals like tortoises and dassies carry on as if it’s their home. Nobody I have spoken to has ever been there.

Let me tell you that this pitiful excuse for a park would be a lot more popular if it didn’t have that dirty great mountain blocking everyone’s view.

Once I have the job, the first thing I will do is appoint a task team to look at relocating Table Mountain to the Cape Flats. The area could do with a bit of topographical excitement.

I am closely connected with people in the brewing industry and am confident that we will be able to secure a sponsorship whereby we get unemployed people from Athlone, Mitchell’s Plain, Khayelitsha and so on to move the mountain rock by rock and pay them in heavily discounted brandy past its expiry date.

With that horrible pile of stones out of the way, I will have enough space to begin planning the Apartheid Theme Park I have always dreamed of creating.

I envisage attractions like the Amazing Water Torture Ride where visitors are strapped into roller coasters with their hands lashed behind their backs and wet pillowcases placed over their heads.

We will also have the Accidental Fall of Death Ride in which tourists are blindfolded and left to wander about on a 100m-high platform scattered with bars of soap.

Liar, Liar Balls on Fire won’t be a ride, but rather a quiz show in which white male contestants are hooked up to polygraph machines with electrodes taped to their genitals. They are then interrogated about their part in propping up the former racist regime. Fun, fun, fun for the whole family.

I will also convert Kirstenbosch Botanical Gardens into a parking lot for staff and faculty of the nearby university. As you are doubtlessly aware, the only people who bother visiting this absurd jungle are little old ladies and Nigerian muggers. And they can find somewhere else to practice their flower-sniffing, purse-snatching ways.

You want a park? Alright, then. Park right here, madam, for just R200 a day. We will be rich in no time at all.

You will be pleased to know that my vision extends all the way down the peninsula to Cape Point. If you ever go to this desolate region, you will find nothing there but tour buses full of relentless Germans and snap-happy Japanese.

Let me remind you that views do not make money. Casinos make money. Open-cast kaolin mines make money. Strip malls make money. Either give me the job and let me do what I do best or, for the love of god, rename this place Cape Pointless.

I expect to hear from you soon.